After generating a new image the first time, a couple of new folders were created. These contain sources, object-files, binaries and the generated images.

These directories were copied from cd

The project is built within the output directory which afterwards contains following items:

Buildroot supports to generate multiple projects with the same toolchain. The name of each project can be configured within make menuconfig. 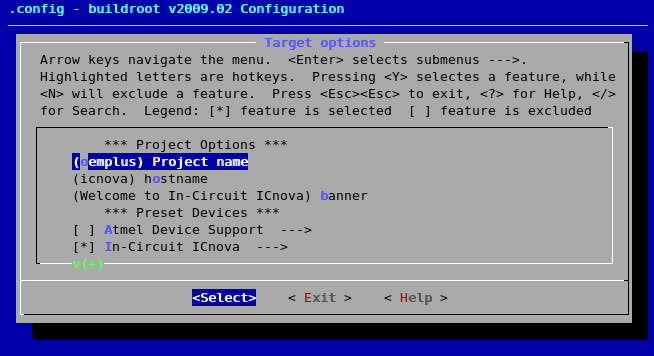 In the default configurations shipped, the projectname is always the same as the config-file name without .config. The project used by adb1000g45.config is adb1000g45, for example. This projectname is used within the generated directory and will be referenced as <project> within this document.

In addition to the projects, some directories contain the architecture, for which their contents are built. These can be avr32 or arm. Throughout this document, arm will be used, to mark these places. Due to this naming it is possible to built a toolchain for ICnova SAM9G45 OEM and ICnova AP7000 OEM in the same directory.

These directories were copied from the support CD

directories on the target

After the ICnova is booted, per default any file within the directory /tmp is written to the systems RAM only, so no access of the real filesystem is made. The directories /sys and /proc are generated by the kernel and contain virtual files only. All other directories contain the files, found in the corresponding template at project_build_arm/<project>/root.